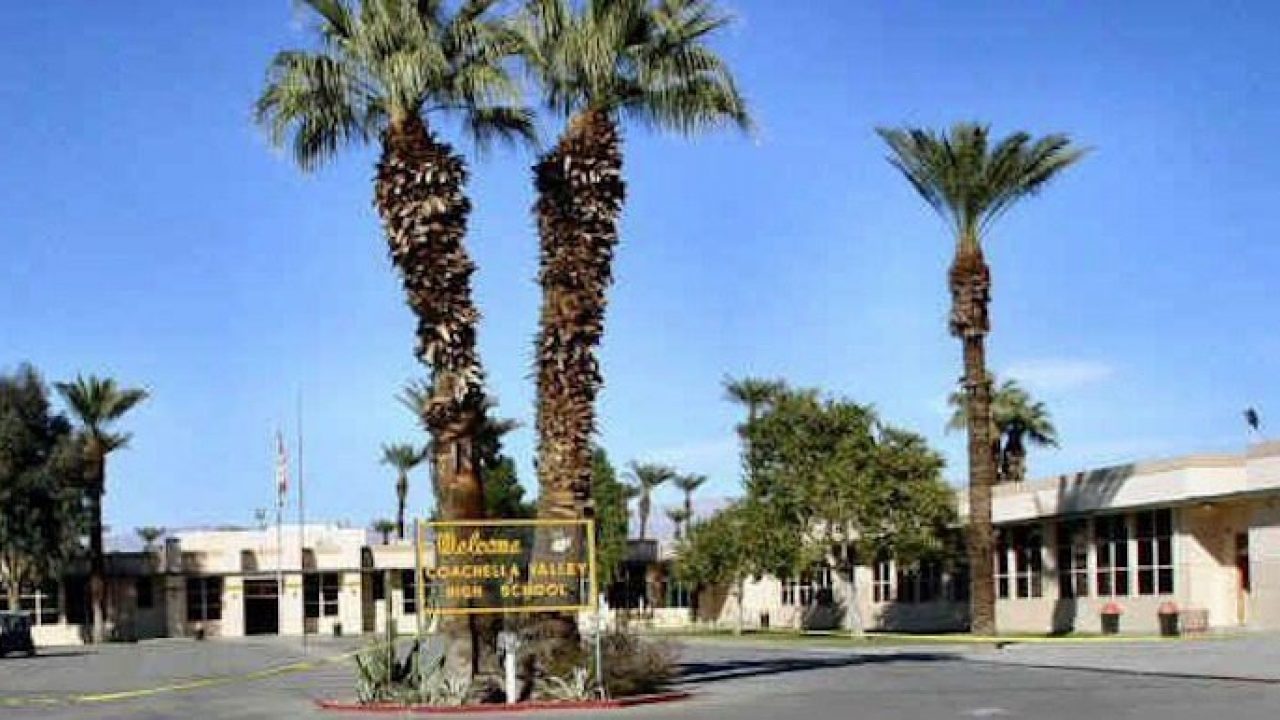 Coachella Valley High School is a public 9-12 high school located in an agricultural community with a 98% Hispanic population. The current enrollment is approximately 2,800 students.

We are currently in our 112th year of serving our students and our local community. 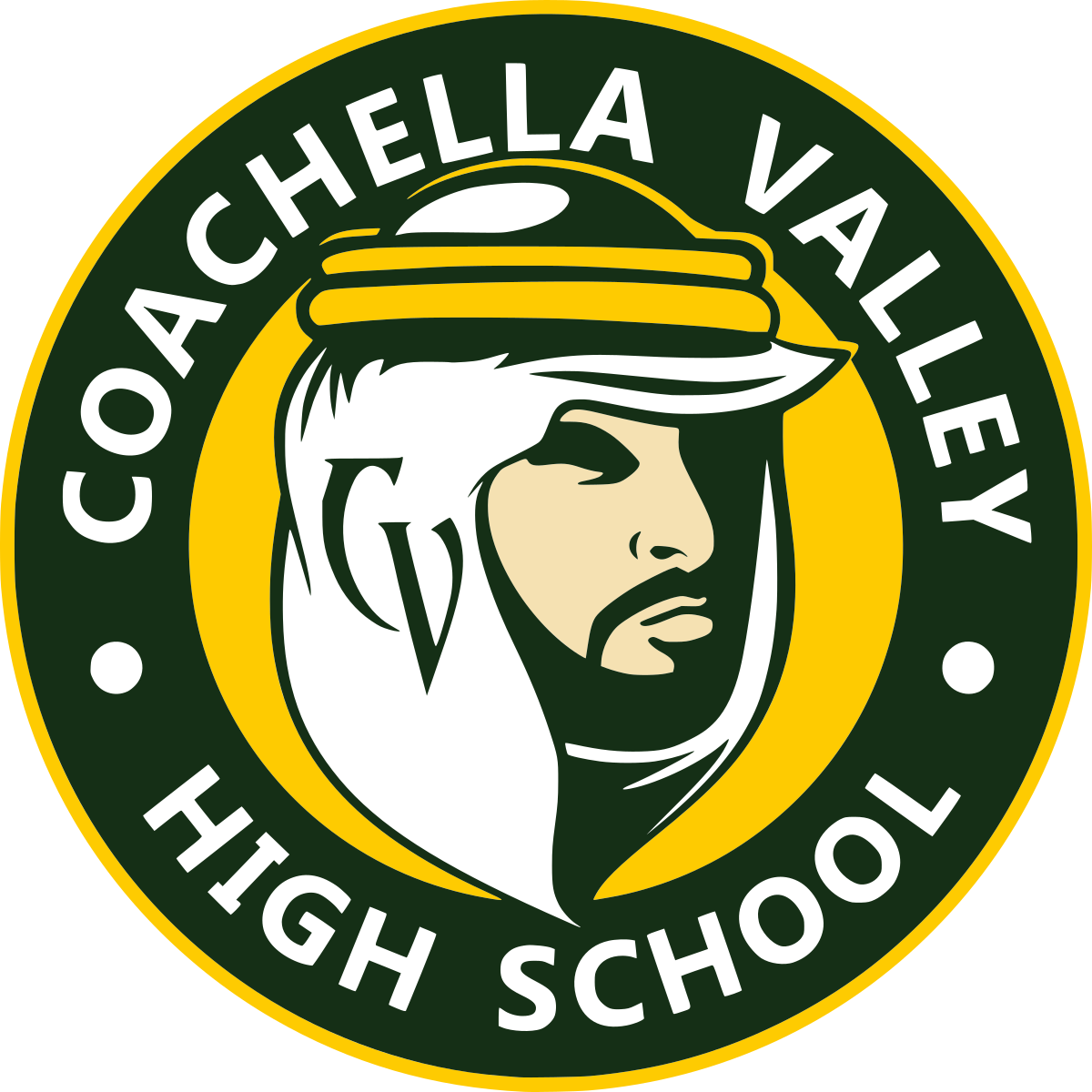 The Coachella Valley High School mascot has gone through an evolution since it was selected in 1921, with multiple changes over the schools 111 year history. Beginning with the Galloping Arab on horseback, to the current Mighty Arab prince, this mascot is honored as a beloved part of the schools history, and the communities ties to the Arabian date industry.

With the success of the date industry, with date shoots imported from Algeria and the Middle East, came the celebration of the first Date Festival in 1921.  Local merchants and community members began dressing in Arabian costumes to celebrate the Date Festival and the similar climate to the Arabian deserts. As the high school started to compete in athletics, the school took on the name of "Arabs" not only for the Date Festival, but also because of the climate, the sand dunes and the 100-degree desert heat. The name of the Arabs fit perfectly with the neighboring towns of Mecca, Oasis, Arabia, Thermal and of course the Riverside County Fair and National Date Festival. The first rendition was a galloping Arab on horseback holding a spear.

In the 1980s another change took place to the mascot. When a group of visitors from Saudi Arabia visited the campus as a part of a tour of the deserts date industry, they recommended that the Arab Mascot have its headdress changed from the fez to the head scarf, because they were no longer under French rule. As a show of respect to our Arab visitors, the school once again changed the headdress to the head scarf. In 2013, "the American-Arab Anti-Discrimination Committee sent a letter objecting to the mascot. The letter prompted a story by Al Jazeera America, the U.S. branch of the leading Arab news network, and quickly spread to USA TODAY and other national news organizations, sparking a slew of online criticism against the school. However, as criticism mounted online, support grew at home. Students and alumni rallied behind the mascot, demanding that the district leave it unchanged. Many pointed to the mascot's deep roots: The school introduced its "Arab" identity more than 90 years ago to celebrate how the area's date industry created a spiritual link with the Middle East."(USA Today, Aug 2014)

In 2014 "The new "Mighty Arab" mascot and logo will represent the school in Riverside County with a trimmed beard and kaffiyeh featuring the initials "CV."

The new mascot was approved at the district's Board of Trustees meeting earlier this week, about a year after the Arab-American Anti-Discrimination Committee voiced objections to the old mascot. Mascot discussion occurred in a closed-door meeting Tuesday before the unanimous vote in favor of the new logo and nickname.

"We're very happy with this," Ayoub told KPCC. "It's something that could be on the murals and on the gym floor without offending anybody. It's not a caricature based on stereotypical, Orientalist views of who Arabs are."(NBC Media, Published September 11, 2014)

Coachella Valley High School was established in 1910 in Thermal, California with one teacher in a one room building.  The first graduate at CV was in 1913 with a graduating class of one student.

The school moved to Coachella in 1914, where it remained for 2 years.

The new location for the only high school for the Coachella Valley was located at a central point on eighty acres of brush land donated by Mr. G. H. Narbonne (Real Estate Developer). Mr. Narbonne owned property throughout the Coachella Valley and owned over 500 acres of dates and grapes. The current school location opened in Thermal in September of 1916 with a new principal and all new teachers. A bond issue was voted for a road and the bus system was started. Previously, students had to provide their own transportation, which was often by horse-drawn vehicles and even by horseback.

By 1939 the student body had outgrown the space so that a major building program was needed. with money from a bond issue and a Public Works Administration grant, the beautiful, modern auditorium and administration buildings were built.

The swimming pool and Teen Terrace were both added in 1952-53, as well as the black-topped basketball courts, parking area, lunch area and the 100 wing of the campus.

In 1955 a new modern gymnasium was completed to seat 1700 students with an upstairs seating area. A new mini-gym was built to accommodate the new girls athletic programs and allowed the girls to participate in CIF-SS and the Desert Valley League.

In the 1990s, the Football Stadium (Date Bowl) burned down and the team had to play all away games until the new stadium was built. A new cafeteria with speed lines and snack bar able to feed 3,000 students was also built. The old Palm Garden with it's 300 date palms were taken out for a new shade structure to be built. A senior pavilion was built because the old senior quad could not be accessed during class time due to the split lunch.

In the late 90s and early 2000s a new state of the art library was built. A new all weather track was added to the stadium.

In 2014 a new state of the art pool replaced the old pool was added to help support aquatics in the community.